Friday, May 10 at Warsaw was a sold-out show. The weather was warm and on this night, the rain stayed away in our favor. Headlining was The Drums, an indie pop band from Brooklyn! The show started at 9, opening with Tanukichan, an indie band from California. I had arrived just in time to when The Drums started performing due to our ever so reliable public transportation. Warsaw is a fairly smaller venue, being one floor and quite flat. Since my friend and I didn’t arrive early, we managed to squeeze ourselves into the side so we could see the stage through the heads of tall people. I was a bit disappointed in how this venue was constructed because if you weren’t in the front, there would be no way to see the acts on stage if anyone was taller than you in the slightest. We got lucky in the spot we found, only to have passersby trying to get to the bar and food area, which I didn’t mind at all.

The crowd took me by surprise – there were a plethora of older men, older than I have seen at a show especially with a newer band like The Drums. (Formed in 2008) I love seeing bands I love get loved by everyone. However, this show was an all-ages show, and that was clear. Once I got blocked by a tall person who wasn’t moving, I decided to go a little further into the crowd, only to be surrounded by cringe teenage girls and couples. They were all over the place and very sloppy which is totally fine until you start stepping on people around you and spilling your drinks everywhere. Then it gets infuriating the lack of awareness to personal space. The show was sold out, but it wasn’t smashed to the brim. There was breathing room and room to dance around so there was no reason for being that obnoxious.

The Drums played a lot of their newer songs off the Brutalism album. As singer/songwriter Jonny Pierce told the crowd, “My past albums have been sad, so I decided to make this one happy! Enough of the sad.” He played songs off all his past albums as well, which I prefer to the newer. The sound system in this venue didn’t travel well, only if you were close to the stage. The sound would have loud humming at points when Jonny sang because the levels were too high. That didn’t phase Jonny, because he is a true artist and musician. He is so quirky on stage with his spooky yet wavy moves. The Drums played for over an hour and did an encore. This was my second time seeing the band, the first being at Elsewhere, where my experience was much better. That being said, I would rate this show 6/10 mostly because of the venue and crowd. I look forward to seeing The Drums again because they are just that good and I highly recommend checking their music out. Jonny is a talented musician and so unique, he is an inspiration.

Powerhouse rock singer, JanaeSound was performing in Brooklyn this past weekend, so she and guitarist Andrew LaVogue stopped by Big Picture Media to chat with me while we snagged photos of them. Janay Woodruff, vocalist, grew up with an operatic background, allowing her to hone her own style musically. Janay shares her inspirations and aspirations with us.

How was the music scene in St. Louis growing up?

I fell into music kind of accidentally, my choir teacher in grade school pulled me aside after class and started playing on the piano. Played higher and higher and was like, “Wow, you can do that?” He gave me this acapella opera cassette tape that I would try to practice, but my mom would try and hide it from me. One night she came home, thinking I fell asleep to it again but it was actually me in my room singing. She was like, “Oh I feel horrible!” Then, my choir teacher took me on what I thought was a field trip, but it was an audition for the Opera Theatre of St. Louis. So my first professional show was at nine years old.

What are your musical inspirations?

Although opera is so beautiful, it is just not for me, so I immediately went into rock, I’ve always loved that. I fell into 80s rock; I love glam rock and the women who ruled that era are so strong, powerful and beautiful in ways that aren’t about physical looks. I was attracted to that strength and admired it so much. I love Led Zeppelin and Aerosmith. Vocally, opera and rock are like sisters. You’ve got these long big notes that just grow!

Since the release of your latest singles, “Diamonds” and “Break Me Down” where do you see your music going?

I actually wrote and recorded a full EP, and I’ve just been dropping singles off that. I have a poppier song coming out in March called “Fear”. This year I really want to do more visual content. We’ve already done two video shoots, with another one coming up next week. I want people to learn more about me, and I think video is a good way to do that. All my songs are uplifting, moving, and hopefully encouraging to people that listen.

What was the concept behind your video for “Diamonds”?

The concept about “Diamonds” is about transforming so I wanted it to be relatable. The video was all white so you could put whatever you want in there. Basically, we’re back to back, signifying how hard things are.

Since you just wrapped shooting the video for “Break Me Down” what can you share with us about it?

Without revealing too much, there is a lot of movement. You have to take a look for yourself when it comes out!

Other than shooting videos, do you have any other things in the works coming up?

Our favorite part is performing, so we do well over 100 shows a year. After this Saturday’s show at the Bitter End, we have to rush back to Portland [Maine] at Merrill Auditorium for a show. We have this really cool project with a VR component: a screen will be behind me and I’ll be wearing trackers on my arms. Then we’re doing a BMI showcase in LA, hitting Nashville in the summer and a few fests.

Where does “Janaesound” come from?

Sometimes artists are treated like a product, and I wanted to disassociate from that. I am Janay Woodruff: I’m a person and that is something to be loved, not to be used or sold. But Janaesound, we’re gonna sell that! I want it everywhere, everything, so I dropped the “Y” and added the “E”.

‘Twas the first day of March, but rain took plunder.

Diet Cig was the headliner, and they took the thunder!

Great Grandpa was one of the openers for the sold-out show, originating from Seattle, Washington. With grunge influence, vocalist Alex Menne sings and screams their “snack rock” sound complaining of social constructs, entitled guys, and zombies. Menne introduced a song by feeling the need to tell the crowd not to touch anyone without their permission. These “words of wisdom” had the crowd silent, with only a few people vocally supporting the gesture. Knowing that this was a standing show and people would obviously be touched was an unnecessary ploy to shove down people’s throats.

The band played songs like the slow, melodic tunes of 28 J’s L8r, a song explaining Menne stopped smoking weed because she thought her friends were zombies going to eat her to good old-fashioned grunge jammers like Teen Challenge with lyrics: “And I drip when I swell/out in my empty room/I only wanted you so bad”. Alex’s vocal range was impressive, from soft soprano to shrieking from yelling, all smoothly transitioned into one another. 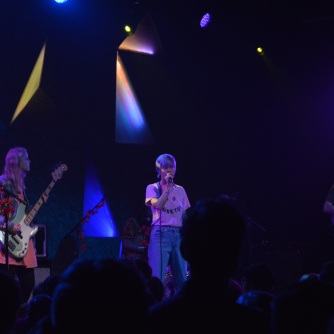 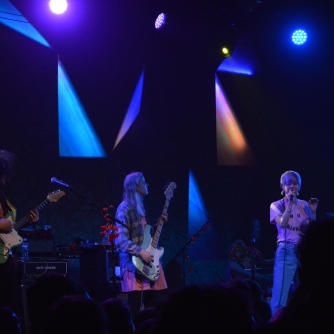 Other band members include guitarist and vocalist Patrick Goodwin, bassist Carrie Miller, drummer Cam LaFlam, and guitarist Dylan Hanwright. Great Grandpa’s songs are all completely different from one another in sound either in tempo or mood, but the differences from one song to the next to create some sort of beautiful planned chaos: but that’s grunge isn’t it? Their newest release, Plastic Cough came out July of last year and can be found here. There’s still time to check them out on tour, playing in Philly on Saturday.

Diet Cig took the stage and spoke of being consensual, friendship, love, and telling your ex off. Alex Luciano, vocals/guitar, was covered with so much glitter, you could see it all the way from the back of the venue. She posted on the band’s Instagram about bringing extra glitter for her-she wasn’t kidding. Luciano began the show with Sixteen, a song about her boyfriend at the time with the same name as hers and how he slut-shamed her. She danced around on stage with her infamous high kicks, yelled at the lights tech to let her see the crowd’s “beautiful faces”, and sang with so much soul you can feel it. 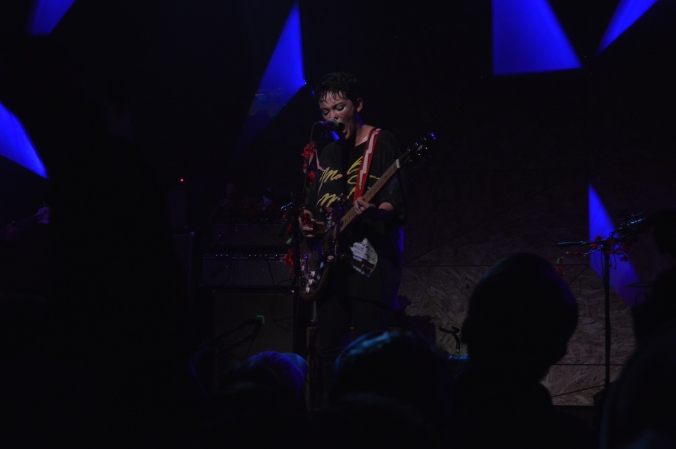 Diet Cig is a pop-punk duo from New Paltz, New York, with Noah Bowman on drums and Luciano on vocals and guitar founded in 2015. Their first EP, Over Easy, was released soon after, with songs of the scene days and problems young adults face. The band’s message is about empowerment, rebellion, and vulnerability. With cutesy delivery, you would think that young women and teenage girls would be their main demographic, but at least half of the crowd at Elsewhere was males, if not more. Luciano criticised the white-cis-male multiple times throughout the night. She seemed to throw feminism into everyone’s face. 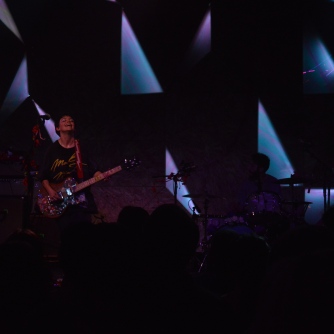 Both bands’ stage presence was impeccable.They had high energy, commanded your attention, and criticized the bad in the world from being touched inappropriately to our politicians’ corruptions. What these bands stood for was having fun with rock and roll while not taking shit from anybody. Though both Great Grandpa and Diet Cig were excessive with their feminism and peace agendas, their performances were sensational. Catch them and Spook School until March 3 at the First Unitarian Church in Philadelphia. Tickets can be found here.

End of the show all bands

To see videos from this show go check out Stars & Scars! 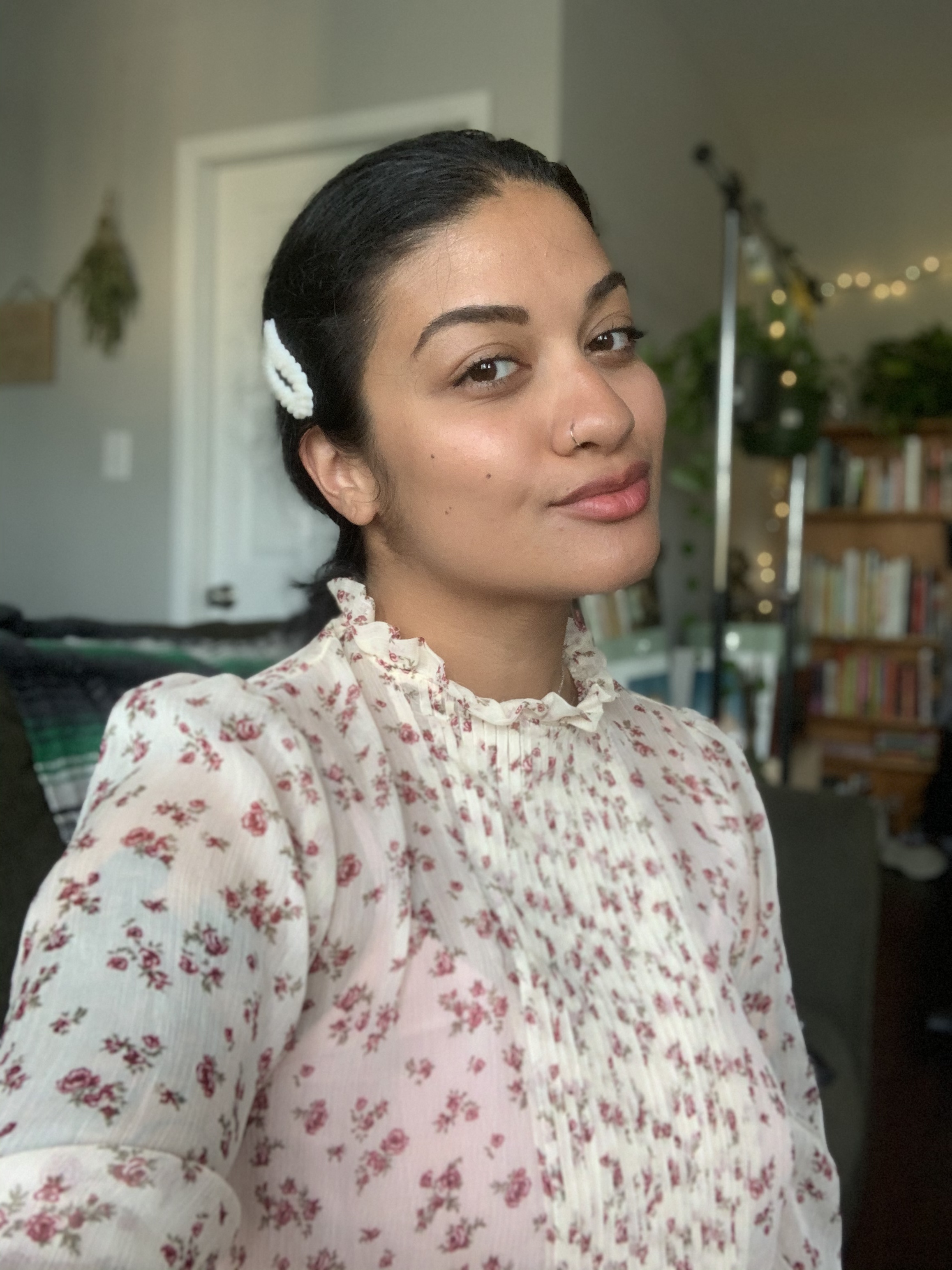